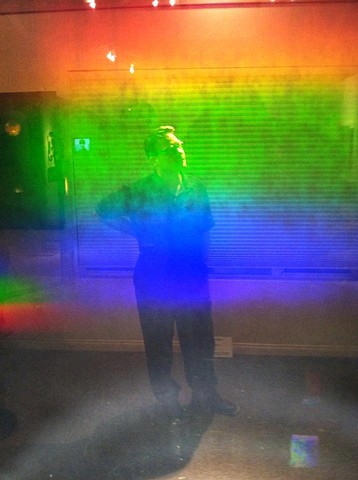 I am a non-objective painter of meditative forms on highly textured, mixed-media surfaces, heavily inspired by my lifelong affair with the sea. Raised in Los Angeles, my artistic journey began after moving to the mid-west in the early 1980s, where academic studies initially took me in the direction of experimental filmmaking.

In the early 1990s I held my first solo exhibition of painting and film at the Individual Artists of Oklahoma gallery in Oklahoma City. I will always find inspiration in the rust-colored soil and native influences of Oklahoma. The move toward non-representation was a slow progression from my early figurative works, which were often large, painterly canvases constructed with encaustic and oil. My college works were influenced by Chaim Soutine and Susan Rothenberg but I soon became interested in the minimalist paintings of Agnes Martin, Eva Hesse, and Antonio Tapies, who incorporated nontraditional materials in their work. After trips abroad in Polynesia, I found myself working in mixed-media; encaustic, fibers, wood and paper. In one of my first serious works I added wax and plaster to the paint and incorporated paper, string, and metal (Green and Black, Levitan Gallery, New York City, 1993). Exploration of latex and oil varnishes yielded an ethereal surface (Inner Companion, CAF Gallery, Santa Barbara, 2000).

I am currently gravitating towards three-dimensional works, concentrating on assemblage and organic sculpture in silk, fiberglass and encaustic materials (Immersion Pods, Gifford Gallery, Santa Barbara, 2019). These works are to be a part of site-specific installations referencing loss, meditation and coping spaces.

My works have been viewed nationally and abroad with group exhibitions in Santa Barbara, San Luis Obispo, Kansas City, Houston, Dallas, New York, Los Angeles, Paris and Florence. My career has been as an artist and educator, becoming a tenured faculty member at Allan Hancock College in California, where specialize in modern art history and mixed media.

I have devoted much of my time and attention to both family (30 years with my lovely wife, Debra, and our two beautiful daughters) and academic issues. I am proud to serve as Chair of the Fine Arts Department and continue to be an advocate for emerging local artists on California’s Central Coast. As a board member for the Arts Fund, I provide opportunities for teen mentorships for Santa Barbara County.